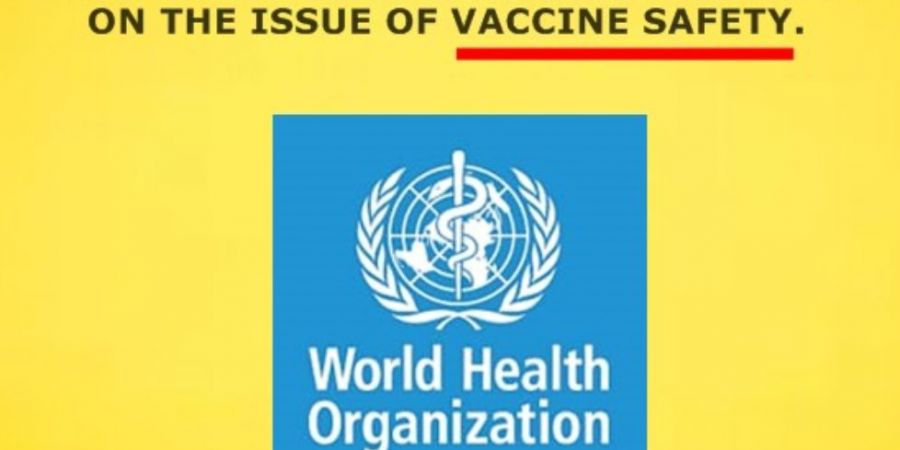 Open letter to the WHO

To the World Health Organisation and those attending the meeting of the Global Vaccine Quality Control Laboratories Network (Rome 25th-27th September 2018).

By sharing science and joining efforts towards better health, your organisation has improved the lives of millions of people, and we are grateful for this. Providing better nutrition, clean water, improved hygiene, and access to medical care, mortality and infectious disease have been drastically reduced. Your extraordinary communication campaign to detect cases of disease and their contacts, and isolate them, finally led to the eradication of the once devastating smallpox.1 These are great achievements and these noble goals should be further pursued.  Today however, we are facing a new epidemic: chronic disease.  In the USA, one in two adults has a chronic disease and one in four has two or more. 2

Obesity, asthma, cancer, immune and autoimmune diseases, neurological and developmental disorders, are ‘lifestyle diseases’ mainly caused or aggravated by bad nutrition and toxic load. Vaccines are administered to healthy individuals to prevent targeted infections, but their long-term impact on the immune system and their potential role in chronic disease is not being evaluated. Individual risk of poor outcomes to both infection and vaccination varies widely and mass vaccination without proper discrimination at the individual level has led to injuries, death and unintended consequences. Recently, independent researchers and laboratories have discovered that many vaccines are contaminated with retroviruses3 and polluted by nanoparticles 4. High levels of aluminium associated with vaccine adjuvants have been found in the brains of autistic children or in people suffering from neurological disorders such as Alzheimer’s disease.5, 6

In your previous meeting you advocated for less independent testing, considered ‘redundant’, in order to speed up the supply of products.7 The recent administration of 250,000 defective vaccines in China8, the tragedy of the oral polio campaign in India with over 450,000 cases of paralysis and death9, the damage caused by the Dengue vaccine in the Philippines10, reports from all over the world of chronic pain and paralysis after administration of the HPV vaccine11, 12,  show that vaccine safety and efficacy are being tragically disregarded in this drive for fast-tracking approval and easy certification.

If developing standards and sharing best practice amongst controlling bodies is needed, testing by national and independent laboratories must be maintained, since fraud and technical hazard from storage or transportation can still occur and biases or new findings would not be detected.  According to your report, «It was noted that the aims of the network are a good fit with industry’s proposal for risk-based testing and networking».13 But this ‘risk-based’ approach geared to reducing test requirements for vaccines considered of ‘low risk’, seems a dangerous pursuit.

Many health authorities complain about vaccine hesitancy, but fail to reassure the public by providing the safety data they request.  All over the world, millions of people have signed petitions demanding more safety, transparency and independent research, but decision makers chose fast-tracking instead.

To restore confidence lost, we insist that before any kind of recommendation or authorisation is issued, ALL vaccines pre-qualified or recommended by the WHO will be submitted to:

Extensive clinical trials conducted by bodies independent from the manufacturers
Medium- and long-term studies on efficiency and safety, not ‘days’.
Tests for carcinogenic properties
Tests around fertility issues
Tests on pregnancy, spontaneous abortion and the developing foetus
Tests for mutagenic effects (changes induced in the DNA)
Tests for effects on the neurological system and development of the brain
Real inert placebo testing, which is almost never conducted on vaccines
We also insist that the WHO should provide studies on:

Adjuvants and preservatives such as aluminium and mercury and their bioaccumulation
Other toxic material used, such as polysorbate, Tween 80, formaldehyde etc
Vaccine safety and the age of vaccine administration
The impact of full vaccine schedules on the global health of a population
The comparison of vaccinated versus unvaccinated populations in global health terms
Viral transmission of people recently vaccinated with live virus vaccine such as measles, mumps, rubella, varicella, influenza or oral polio vaccine for example.
In particular, we ask that the use of combined vaccines and the same-day administration of multiple vaccines be thoroughly investigated.  Figures from India show that the number of deaths within three days following vaccination doubled when using a Pentavalent (5-in-one) vaccine rather than a triple DTP vaccine. It is projected that this change will cause between 7,020 and 8,190 deaths each year in infants in India14. It further appears that in confidential periodic safety reports of the hexavalent Infanrix polio vaccine submitted to the EMA, the manufacturer GSK had deleted a number of death cases between reports. 15

Concerning the measles-mumps-rubella vaccine and its link with autism, the only reference mentioned on the autism section of your website is an out-dated French article translating press claims that have been disproven in a decision from the English High Court in 2012. 16, 17 At the same time, William Thompson, an expert from the CDC, confessed in 2014 to having manipulated the data of a key reference study but as of present date, no further investigations have been made.18With one in 36 children diagnosed with an Autistic Spectrum Disorder in the USA19, this study is an absolute priority and independent laboratory testing and new clinical trials must now replace the flow of ‘inconclusive’ statistics.

Confirming this priority, an Italian Parliamentary Commission recently reported numerous deaths, autoimmune diseases and cancers in military personnel after multiple vaccines had been administered and called for more research and precautionary measures20. The long-term effects of vaccines are not studied and the recent revision of the classification of “Adverse Events Following Immunisation” does not allow for accurate reporting of death cases or of side effects not previously declared by the manufacturer.21 With the alarming rise in chronic diseases, immune, autoimmune and developmental disorders worldwide, immediate responsible action is imperative.

In its recent resolution on vaccine hesitancy, the European Parliament calls for “transparency and declaration of conflicts of interest, including researchers working for the World Health Organisation and the European Medicines Agency”. It proposes that “researchers subject to a conflict of interest be excluded from evaluation panels”; further calls for “the confidentiality of the deliberations of the EMA evaluation panel to be lifted” and proposes that “the scientific and clinical data which inform the conclusions of the panel, and whose anonymity is guaranteed in advance, be made public”. 22

It fails however to question biased reports. 23

When it comes to approving or recommending a new vaccine, we know that:

Pre-licensure studies are exclusively carried out by the manufacturers who stand to profit.This is a clear conflict of interest.
Pre-licensure studies do not and cannot capture all adverse events that will occur in real world situations.
Peer reviewed scientific journals have huge conflicts of interest and most studies are biased or false 24, 25, 26
Post-marketing surveillance in all countries is woefully inadequate. Only 1 to 10% of adverse events are being reported. In the USA, the mandatory biennial safety reports from US Health & Human Services to Congress on vaccine safety have simply never been written. 27
The funding of your organisation relies on important private donations, such as the GAVI alliance, a partnership with banks and industries. The fact alone that this very meeting is funded by a private investor, the Bill and Melinda Gates Foundation28, is highly questionable.  Given this inherent conflict of interest, it is therefore absolutely imperative that independent studies and experts be involved in the approval and recommendation of vaccines and vaccine policies.  And if the WHO guarantees the safety of the vaccine it is pre-qualifying, it should also assume liability for adverse events following vaccination.

Promoting mandatory vaccination for entire populations with products that essentially rely on manufacturers’ data for their general safety and efficacy is an evident breach of the precautionary principle and as such becomes a forced medical experiment.

Since the health risk of vaccination is entirely borne by individuals, the WHO must ensure that it is minimal, and that fully informed consent is observed.

In order to restore public trust in health authorities and improve public health policies worldwide, we therefore demand actions and answers that meet our requests.

We thank the honorable members of this assembly for their attention and pray they will open their hearts and minds to our message.

References:
1. «The Global Eradication of Polio» Final Report of the Global Commission for the Certification of Smallpox Eradication, Geneva, December 1979, the World Health Organization, 1980.

2.  «About Chronic Disease», Centres for Disease Control and Prevention, 5 September 2018

11.  P. Goetzsche et al. «Complaint filed to EMA over Maladministration Related to the Safety of the HPV Vaccine», Nordic Cochrane

26. M. Angell «The Truth about Pharmaceutical Companies.  How They Deceive Us and what to do About It», Random House, 2004

27. «Mandate for Safer Childhood Vaccines», Decision of the US District Court, Southern District New York, Between Informed Consent Action Network and the US Department of Health and Human Services

28. The Bill & Melinda Gates foundation is one the 5 biggest investors in the world. In August 2018, it had 22,114 million $ in stocks according to gurufocus.com